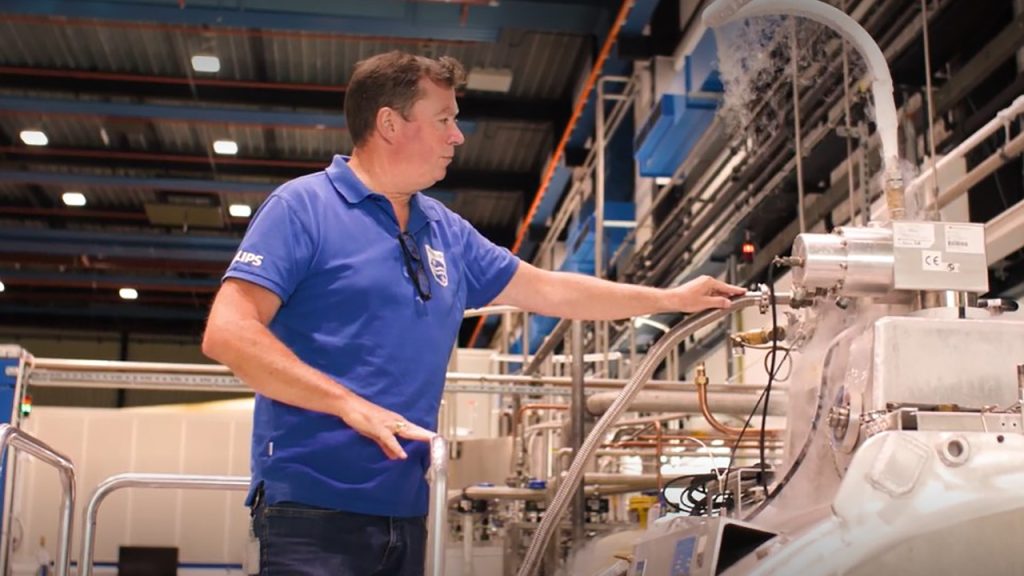 ON THE SAME TOPIC

Do you have the capability to retrieve and purify liquid helium from end-of-life MRI scanners across the globe, making it suitable for reuse?

Philips develops, manufactures and sells mainly medical equipment, such as MRI scanners, as well as personal grooming devices such as electric razors. In 2020, Philips achieved a global turnover of nearly 20 billion euros. The company currently employs nearly 82,000 people. The headquarters are located in Amsterdam, and the Dutch MRI scanner production facility is located in Best. Philips is serious about striving for a circular economy and wants to achieve a closed chain for all materials used in all hospital equipment by 2025. The Circular Equipment department consists of around 40 employees who are constantly working on a wide range of issues around this topic. Some focal points include the refurbishment of equipment that is reaching the end of its lifespan, reclaiming, overhauling and selling parts that can still be reused, and recycling parts that are no longer suitable for reuse. The current global market for liquid helium in bulk is estimated to amount to around 2.7 billion dollars, and the unit price (USD per thousand cubic feet) has increased by over 135% in the past two years. The demand for helium is currently growing, particularly in the medical, technological and aerospace sectors.

The present challenge revolves around the purification of contaminated liquid helium during the process of draining it from the storage tank in the MRI scanner into the transportation canisters. Philips is looking for, at worst, a cost-neutral solution, with the environmental benefit being the first-and-foremost driver. The supplier should have thorough knowledge of the global helium market, and the solution offered should be deployable in the short term (TRL level 7/8). A business case in which the supplier themselves would be responsible for processing the reclaimed helium would be preferable.

How to apply: if you would like the opportunity to submit a solution you are developing, or expertise you have in the above area, please contact us to info@wheesbee.eu for an expression of interest by November 3, 2022 (sign up no later than 5 pm).

Many Philips MRI scanners will be reaching the end of their lifespan in the coming years, meaning that they need to be decommissioned. During the decommissioning process, the scanners are disassembled partly or in full. One of the essential components of any MRI scanner is the super conductor magnet with its own cooling system. This cooling system is the focal point of the present challenge.

The cooling system utilises helium. The scanner contains a donut-shaped barrel, which can store up to 1,600 litres of liquid helium used to cool the super conductor magnet. When the scanner is dismantled at the end of its lifespan, the barrel will still contain around 600 to 800 litres of liquid helium. Philips wants to be able to drain and purify this helium to then resell it for reuse.

Helium is a finite resource on our planet. Current estimates suggest that the global helium supply will run out in 2035-2040. Awareness of this impending helium scarcity has been growing in recent years, and helium prices have gone up significantly. As such, reclaiming helium from end-of-life devices is not just a good way of combatting scarcity, but also provides economic advantages. Reclaiming liquid helium is part of Philips’ endeavour towards a circular supply chain.

Draining the helium from the end-of-life devices is not a problem. The process is the same as the one used for filling the barrels, except in reverse. By pumping pressurised gas or air into one side of the barrel, the liquid helium is essentially pushed out, collected and stored in special cylinders designed to transport the helium (Dewars).

The problem is that after having been used for between 15 to 20 years, the leftover helium is contaminated, mostly with frozen air in the form of crystals. Due to the presence of these frozen water crystals in the liquid helium, it cannot be resold. Buyers are only interested in pure liquid helium because it is much easier to sell.

The present challenge revolves around the purification of contaminated liquid helium during the process of draining it from the storage tank in the MRI scanner into the transportation canisters.

Philips is already playing an active role in this process, by taking care of the return logistical processes to enable reusing parts from MRI scanners that need to be decommissioned. The Philips MRI scanner factory in Best has the equipment needed for reclaiming helium as a gas. However, this equipment is not available worldwide on site, i.e. wherever systems are being decommissioned by Philips engineers or subcontractors. As such, the valuable gaseous helium in many of these systems is currently simply escaping into the atmosphere. In the coming three years, at least 1,000 MRI scanners in hospitals around the globe are slated to be decommissioned. Even after those initial three years, many more devices will need to be decommissioned over time. Many thousands of scanners are currently in use worldwide, ensuring plenty of work for twenty years to come.

While the latest generation of MRI scanners uses significantly less helium, MRI scanners that contain 1,000 litres of helium or more are still being sold. Moreover, other MRI scanner suppliers are dealing with similar issues.

Philips is investing in the development of green technologies and is working on reducing the environmental impact of its activities and ensuring healthy ecosystems.

What is Philips looking for?

This challenge is of both a technical and a logistical nature, due to the widespread and sometimes remote locations of the MRI scanners to be decommissioned. It comprises draining and purifying the liquid helium, storing it temporarily at minus 268 degrees Celsius (5.1 degrees Kelvin) and supplying it for reuse. Large helium purifiers already exist, but the challenge is designing a system that is smaller and thus can more easily be deployed worldwide. An immediately deployable mobile solution that can be used to purify the helium right away as it is being drained from the end-of-life MRI scanner would be preferable. The entire process must be completely safe, due to the explosion hazard of expanding helium, the extremely low temperatures and the transportation of helium in a liquid state. Compliance with all applicable legislation regarding transport of dangerous goods is non-negotiable.

Philips is looking for, at worst, a cost-neutral solution, with the environmental benefit being the first-and-foremost driver. The supplier should have thorough knowledge of the global helium market, and the solution offered should be deployable in the short term (TRL level 7/8). A business case in which the supplier themselves would be responsible for processing the reclaimed helium would be preferable.

The solution must be a safe, highly functional system that can eventually be deployed worldwide. Ideally speaking, the solution would fit into the current helium supply chain, without involving any additional work on Philips’ part. While the decommissioning schedule for end-of-life MRI scanners is available well ahead of time, the system must allow for flexible deployment pending last-minute changes to flight plans.

There are two clear (though perhaps more) potential strategies to create the desired solution:

The first strategy is strongly preferred by Philips and seen as the ideal solution. This filter would need to be compact and easily transportable enough to be shipped across the globe to any site where an MRI scanner needs to be decommissioned. As such, there is no need for a large number of filters to be developed; 1 or a few mobile filters would be plenty to enable Philips to decommission all of its older MRI scanners. The purification process could also occur in the interim, such as during helium refills. The process of draining and purifying 600 to 800 litres of liquid helium cannot take more than a single workday.

The solution offered should at least meet the following requirements:

What is Philips NOT looking for?

Solutions in which Philips would need to fulfil an active R&D role are most definitely not preferred.

Retrieving helium as a gas and then re-cryogenising it (cooling it down to minus 268 degrees Celsius) also takes an enormous amount of energy, and is therefore not preferred.

Philips is also not looking for an alternative to helium, as the amount of helium required by the latest generation of MRI scanners is already significantly reduced.

What’s in it for you?

If Philips believes in the solution offered, the bidder will be granted insight into the MRI scanner decommissioning process. Options include a session with the helium experts in Best as well as a tour of the facilities. A pilot budget of 10,000 euros minimum will also be made available.

The bidder who offers a suitable solution will gain entry to a market with many thousands of decommissionings over the next 20 years at least (even outside of Philips).

Currently, 1,000 MRI scanners are slated for decommissioning in the coming three years. The value of helium fluctuates considerably, is sensitive to geopolitical developments and currently has a substantial, growing value per litre. The amount of helium that can be reclaimed from an end-of-life MRI scanner lies between 600 and 800 litres. As such, this is an excellent growth business case amounting to at least 15 to 20 million euros, with long-term prospects.

The Wheesbee team from Innovation Engineering Srl is specialized in supporting Open Innovation initiatives by facilitating the matching between problem owners and problem solvers in the framework of a large network of innovative companies.

Contact us to be part of our network with your Open Innovation Challenges.

Do you have any questions?

subscribe
We use cookies to personalise content and ads, to provide social media features and to analyse our traffic. We also share information about your use of our site with our social media, advertising and analytics partners who may combine it with other information that you’ve provided to them or that they’ve collected from your use of their services.
Cookie SettingsAccept All
Manage consent

This website uses cookies to improve your experience while you navigate through the website. Out of these, the cookies that are categorized as necessary are stored on your browser as they are essential for the working of basic functionalities of the website. We also use third-party cookies that help us analyze and understand how you use this website. These cookies will be stored in your browser only with your consent. You also have the option to opt-out of these cookies. But opting out of some of these cookies may affect your browsing experience.
Necessary Always Enabled
Necessary cookies are absolutely essential for the website to function properly. These cookies ensure basic functionalities and security features of the website, anonymously.
Functional
Functional cookies help to perform certain functionalities like sharing the content of the website on social media platforms, collect feedbacks, and other third-party features.
Performance
Performance cookies are used to understand and analyze the key performance indexes of the website which helps in delivering a better user experience for the visitors.
Analytics
Analytical cookies are used to understand how visitors interact with the website. These cookies help provide information on metrics the number of visitors, bounce rate, traffic source, etc.
Advertisement
Advertisement cookies are used to provide visitors with relevant ads and marketing campaigns. These cookies track visitors across websites and collect information to provide customized ads.
Others
Other uncategorized cookies are those that are being analyzed and have not been classified into a category as yet.
SAVE & ACCEPT